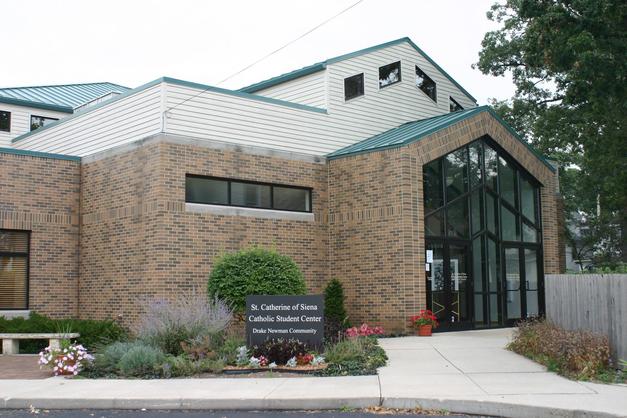 The Drake Newman Club has been serving Catholic students and faculty since the 1940s. Priests who served at Dowling High School when it was located nearby would attend to the Newman Club. Sacramental ministry could be found at St. John’s Basilica, just a few blocks away from campus. 1967 was a key year when Bishop George Biskup named Msgr. John McIlhon to be the first full-time Newman chaplain. A small storefront center was established near the Varsity Theater on 25th street, just across from Old Main.

In 1969, Bishop Maurice Dingman established the “Drake Newman Community” as a non-territorial parish of the Diocese of Des Moines.  It was incorporated as Drake Newman Community as Bishop Dingman envisioned the new parish serving students, faculty, and staff at Drake University, as well as other people who have a commitment to that ministry.

At that time, they operated out of a house on 30th street, near the residence halls and Greek Street. They would hold Mass wherever they could find space: the Odd Fellows hall, the reception room at Sheslow Auditorium, the Meredith Hall auditorium 101, the auditorium at Mercy Hospital when school was not in session, the First Christian Church fellowship hall, the library at Dowling High School, and even occasionally they would have “Mass on the Grass” (outside on the lawn). But for most of this time, the Bulldog Theater in the Olmsted Student Center would serve as their home. Each weekend they would transform the theater into their church, and when they were done, they would pack everything up until the following week. They were truly a “Pilgrim People”.

In 1993, discussions began to create a permanent site for the Drake Newman Community. That vision became a reality when the current building was dedicated in 1997. The center sits on land owned by Drake University and has been leased for 100 years. At that time, Bishop Joseph Charron approved the request of the parishioners that the center be known as “The St. Catherine of Siena Catholic Student Center.”  The building includes office space, meeting rooms, a library, a kitchen, and a Blessed Sacrament chapel. The interior of the building is divided into two sections: a fellowship section that accommodates 150 seated at tables and a worship space which holds over 250 people.

The Student Center came of age in the exciting days following the Second Vatican Council. Through the years priests, sisters, and laypeople have built a vibrant community with a passion to seek justice and to help those who are hurting. The parish is small enough for people to develop authentic relationships and build a true community. The center strives to support students’ growth in faith as they grow in their academic pursuits.

Annually, the David Robinson scholarship will be up to $5,000 and for the purposes of paying the student’s educational expenses.

GET APPLICATION
Scroll to Top